These photos, taken by my father in the 1950s, show a landscape that I love. 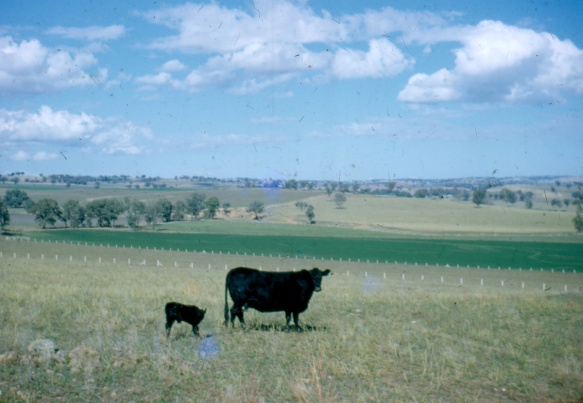 They are photos of the farm where I lived until I was 13. Although they were taken before I was born, they show scenes that are deeply familiar to me: craggy old gum trees, grazing cattle, vibrant lucerne flats, and dry, eucalypt-scattered hills rolling away as far as the eye can see.

The photos are old and fuzzy, so they don’t really convey the beauty of this productive farmland, but when I look at them I recall so many happy memories, a sense of peace and deep connection.

My Grandfather’s stock feed company bought the farm in the late 1930s from the Grants, an old local family who were our neighbours. I remember them living in a house overlooking the Belubula river, a few miles out of Canowindra. They had sons a few years older than me who sat up the back of the school bus.

I knew little about the Grants when I was a child, but now I realise that they were probably part of a larger clan of non-Indigenous Grants in the Cowra-Canowindra area who are distantly related to Aboriginal journalist Stan Grant.

In his memoir, The Tears of Strangers, Grant traces his family back to John Grant, an Irish convict who arrived in Australia in 1811 and after serving his time became a farmer on Wiradjuri land in the Central West of New South Wales.

John established the towns of Hartley and Canowindra, and had a large farm near Cowra. His descendants still farm in the area, and Stan Grant visited some of them when researching his family history (although not, I think, the branch that I knew).

The point at which the Irish Grants and Stan’s Wiradjuri ancestors merged and then almost immediately diverged, is quite a long way back. His great-great grandmother Mary Anne Grant was the daughter of John Grant’s son and a Wiradjuri woman (the daughter of a leader called Wongamar).

I say diverged because that is one of the key themes of Grant’s book — the ways in which racism and colonialism determined the disparate futures of blacks and whites who shared a common ancestor. He traces the radically different lives of John Grant’s Aboriginal and non-Aboriginal descendants down through the generations: on the one hand, dispossession, stolen children, poverty, and thwarted aspirations; on the other, wealth, community respect and achievement.

As a respected journalist with an international track record, Stan is really the first of the Wiradjuri Grants to achieve success in a white society on white terms. He writes of relatives and childhood friends who have given up hope of better lives and are caught up in addictions, dying far too young. They’re held back by the grinding force of racism — both external and internalised — and the long term impact of intergenerational trauma that many Aboriginal people struggle with every day.

I’ve read stories like his before. Having studied Aboriginal history at University, a lot of the issues he covered were familiar to me. I remember crying my way through text books and oral histories as I learned about the massacres and poisoned waterholes, the rape of Aboriginal women, and stolen children. But reading The Tears of Strangers was different, because it spoke to me directly about people who walked on the same land that I had walked on, as a child.

It’s the story of their forced disconnection from land and culture, set among the very same rolling hills and flood plains where I learned my own culture and developed my own sense of connection to the land. The same land, but transformed.

My Dad and uncle and the other farm workers grew lucerne to feed Grandpa’s mills, on river flats that must once have been wetlands. The river was lined with willows, not eucalypts or acacias. There were no kangaroos or emu on the carefully managed pastures where cattle fattened for the market, and the tree blocks Dad planted to ward off erosion were too small and isolated from each other to host possums. But most significantly, when it came to who cared for the land before we did, before the Grants did, there was silence.

That silence has now been filled, at least for me. Now I know that the Cowra/Canowindra area where we farmed was not just populated by nameless and vanished Aboriginal people, but that Stan Grant’s people were there. I know more of the human stories that led up to our ownership. I better understand what was lost, so that my people could reap the benefits of this fertile soil. It makes a difference. It makes history more real and more personal. I wish all non-Indigenous Australians could find stories like this, about the exact places where they’ve lived.

A few times lately, I’ve heard Aboriginal leaders say, with extraordinary generosity, that they encourage non-Indigenous people to find a spiritual connection to country (the land and environment), because in doing so we can all find a better way to live here together, and reconcile with the dispossession that’s occurred.

I welcome this. I wouldn’t claim my own connection is anything like that of the traditional owners, but I do feel that having grown up on the land, having seen how closely our farming family cared for it, I have a glimpse of how beneficial embracing connection to country could be for all of us. By filling in some gaps in my understanding of the land I love, Stan Grant’s book has made that even clearer.

PS: Stan Grant has a lot more to say in this book, especially about the meanings of Aboriginal identity in our 21st century society where connections to traditional culture have been so disrupted, and also about how Aboriginal people might secure a better future, but that’s beyond the scope of what I wanted to focus on for this post — and also I’ve returned the book to the library and without it I couldn’t do those issues justice. I’ll have to go buy it.

This post was written for the WordPress Weekly Photo Challenge: Landscape and my own Indigenous Reading Challenge 2016.

14 thoughts on “Stories of a landscape”